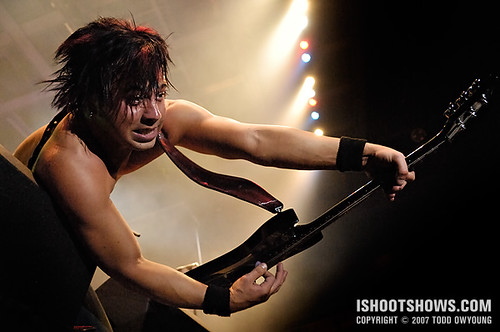 For the second time in a week, I had the opportunity to photograph a gig with my brother, Chris Owyoung of OneLouderPhoto.com. Moving onto my shooting turf after a spin at NYC's Blender Theatre at Gramercy for the VHS or Beta show last week, we hit the Pageant to catch Modern Day Zero deliver a little straight-ahead rock for the pre-Thanksgiving festivities.

Playing a long, nearly hour and a half set, the St. Louis five-piece played to an intimate crowd of several hundred that had swelled to a surprisingly solid turnout for the evening, with the venue reporting selling 500+ walk-up tickets alone.

Co-headlining with Eli-Stone, the band was all grins and seemed to genuinely enjoy the performance, pushing right up until the 11:45 curfew. Guitarist Zach Broderick in particular put on a rock star performance, genuinely appearing to love every minute on stage and gave out guitar picks to his fans throughout the night. 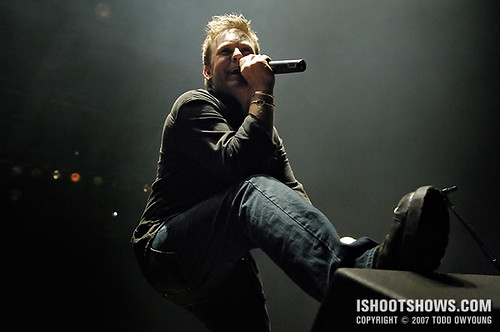 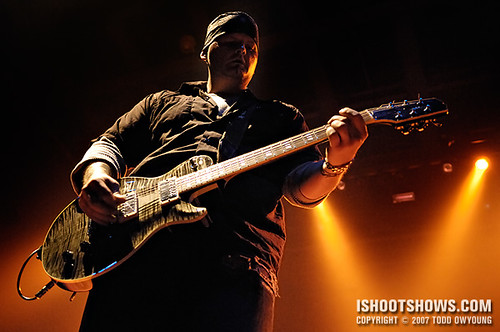 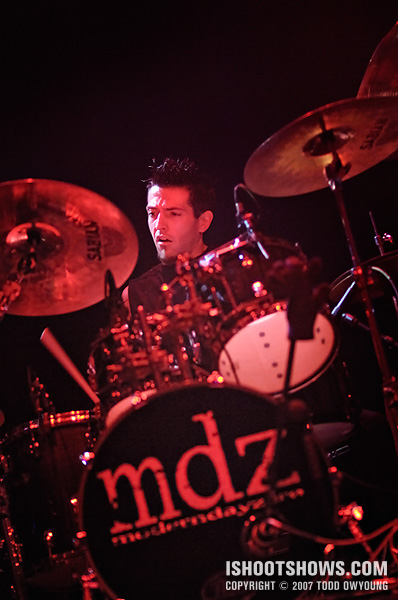 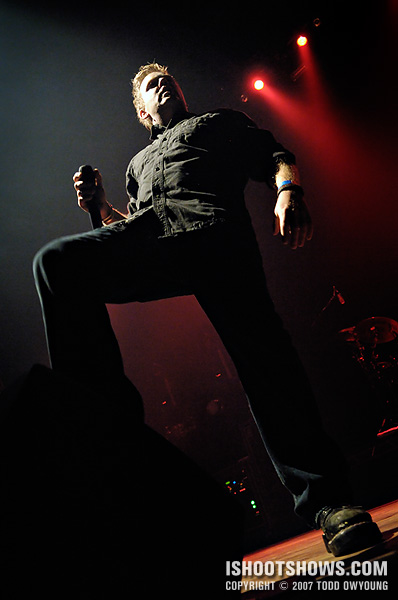 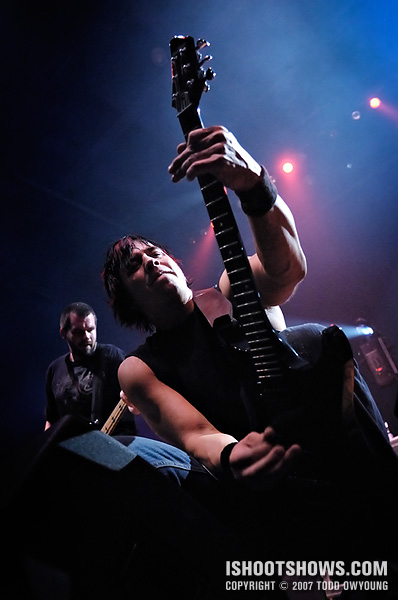 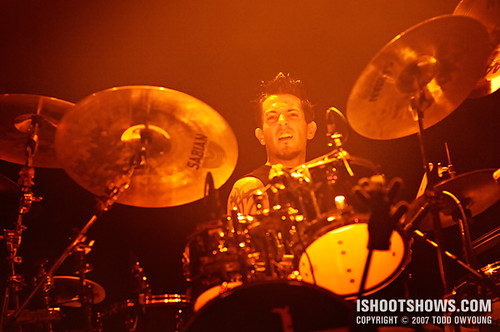 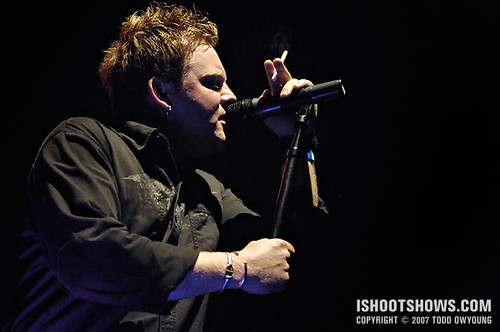 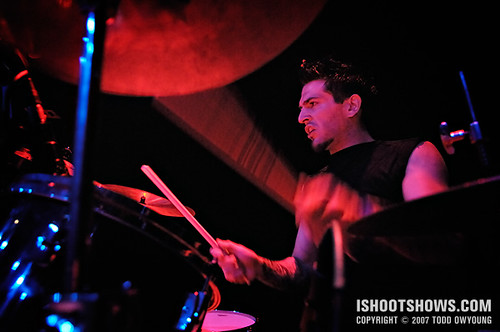 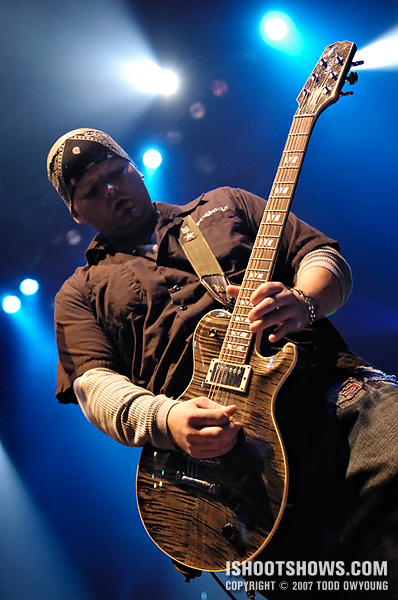 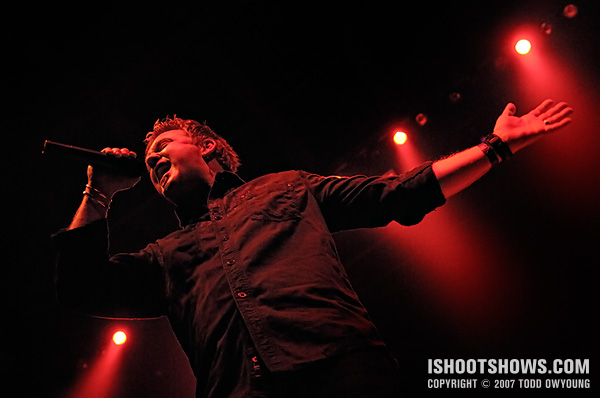 Chris and I arrived at the venue shortly after the second band had taken the stage and hit the box office to check out the shooting situation. At the window, we met up with Zach Broderick, guitarist for Modern Day Zero, who set us up with access. Having photographed Zach and the rest of his band back in September during a three-day festival, I was interested to check out their performance at an indoor venue.

Entering the venue, there was a narrow photo pit between the stage and floor, which proved a little tight but perfectly workable for the two of us. Aside from a brief stint on stage to pick up shots of drummer Blake Nelson, I shot from the pit for the entirety of the show.

The set for Modern Day Zero's performance was relatively dark, but sparse moments of flooding white light made for an interesting shoot. Overall, backlighting dominated with heavy reds and blues for a fire ‘n ice theme during the night. High frontlighting contrasted this scheme, drawing heavy shadows over singer Scott Gertken and his dramatic rock posturing.

Due to the low light, I let the shutter speeds slide during the gig; shooting at ISO 1600 and f/2.8, shutter speeds ranged between 1/20 to 1/160. One interesting facet of the slower shutter speeds is that they produced a higher than usual percentage of shots that featured catchflash. The lead shot of Zach is one example of this serendipitous feature of a point & shoot's on-camera flash providing a nice bit of fill to the ambient light.

Despite the lack of light for much of the show, I stuck with the Nikon D2x and Nikon 17-55mm f/2.8 for the length of the set. While the f/2.8 aperture was inadequate at ISO 1600, a loose attitude toward acceptable shutter speeds allowed the image-making to remain fluid. For this set, the 17mm end of the zoom was particularly useful, though the midrange up to about 30mm was also did well for the relatively far distance of the performers in most of these shots.

The Nikon 85mm f/1.4 made a brief appearance on the camera mount for a few snaps of Nelson on drums, shot from the pit. While singers often benefit from the telephoto lens as well, Scott Gertken's relatively close position to the front of the stage meant that the 55mm end of the zoom was perfectly suited for his two-handed grip of the mic.