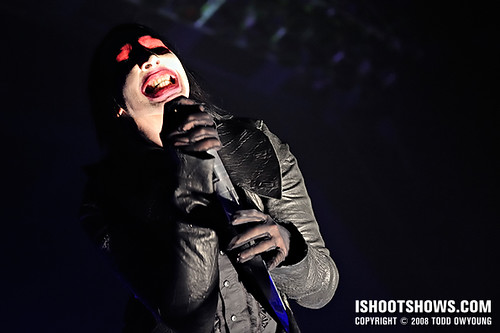 The new cult of Manson is chanting the icon's name as the lights go down, and moments later, when the black kabuki curtain bearing the singer's initials drops, the roar is palpable.

Fresh of his European Tour, Marilyn Manson descended on the Pageant to commune with his faithful fans, 2300-strong, in a sold-out performance.

The Rape of the World Tour also marks the return of Twiggy Ramirez, long-time Manson bassist and collaborator. 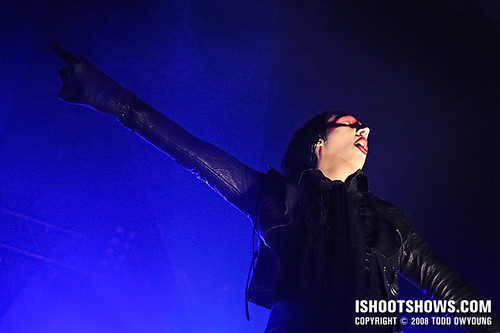 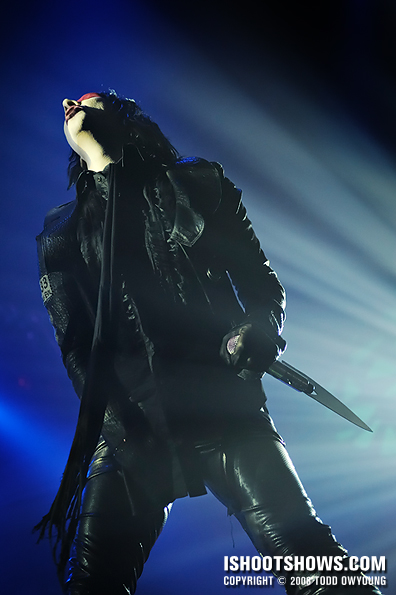 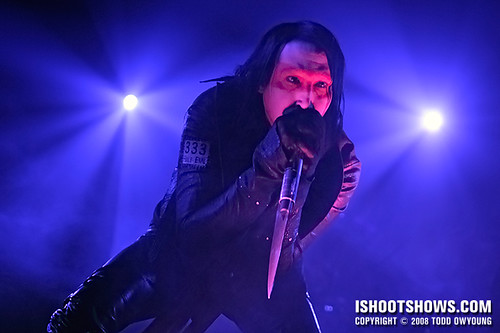 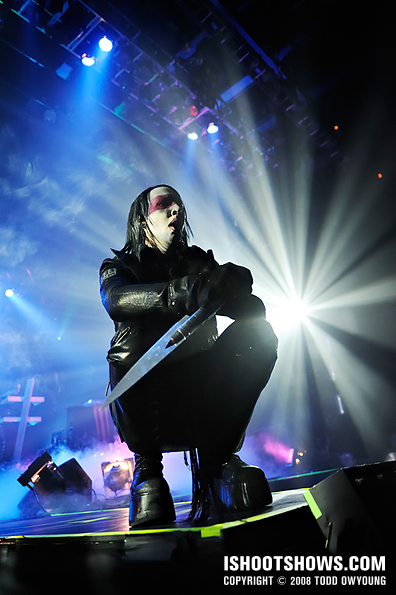 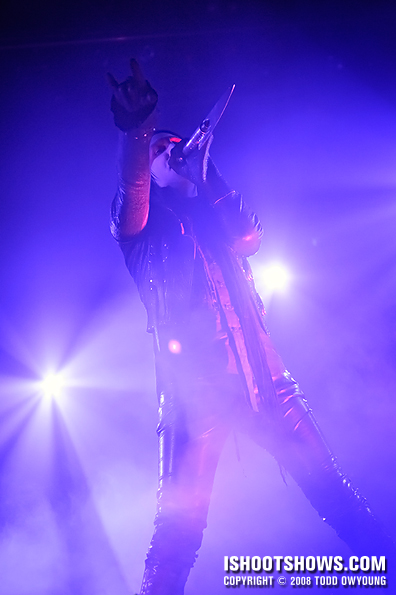 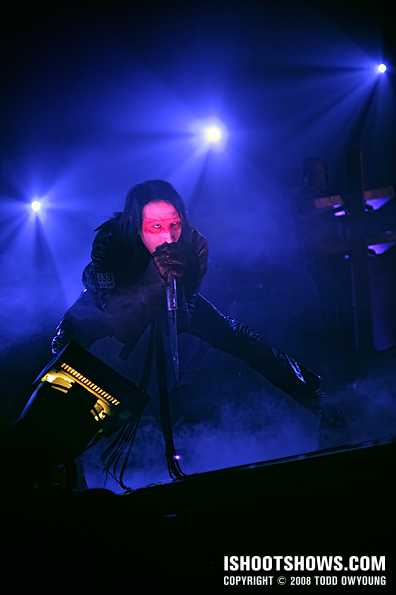 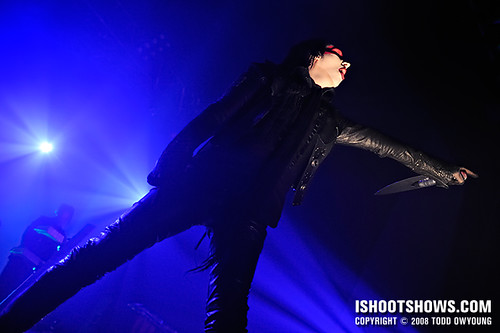 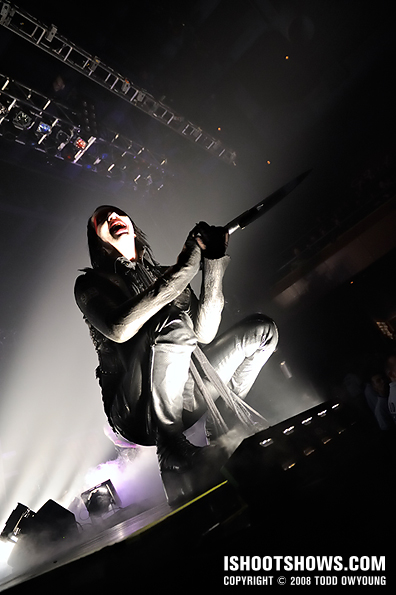 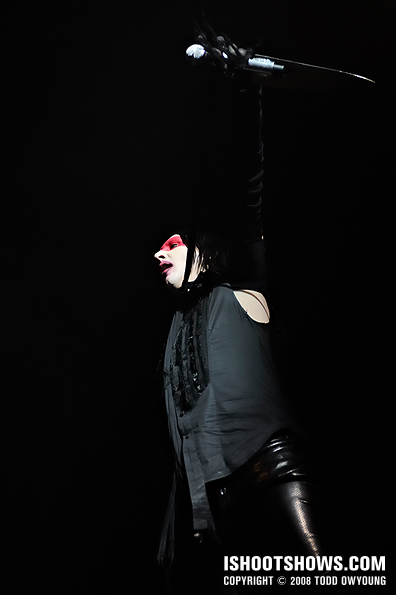 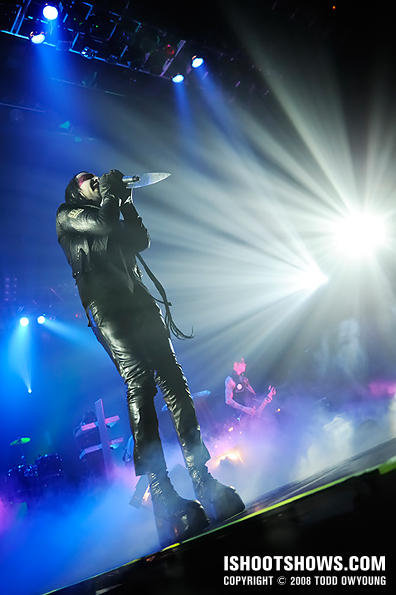 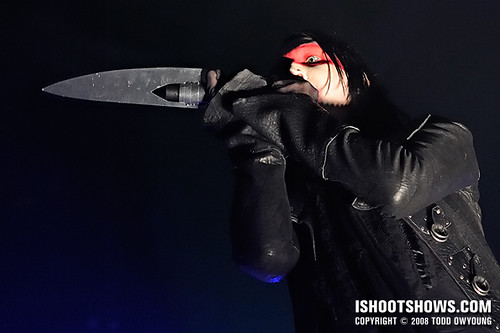 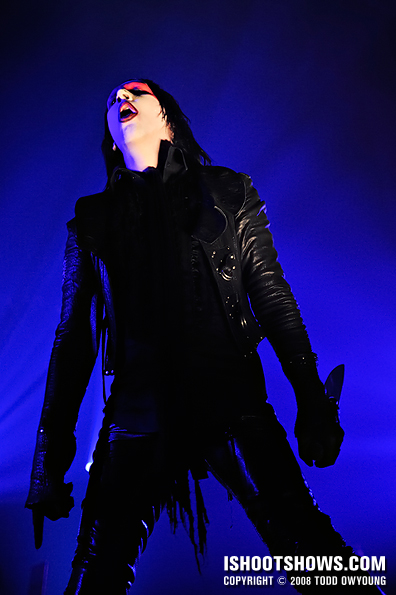 Arriving at the venue, I was curious to see what the pit would be like, considering the small catwalk that Manson has employed on this tour. Heading down to the floor, I saw that the normal barricade was pushed out about halfway out into the general admission pit, bowing out at the center to accommodate the one and a half-meter extension.

Talking to security, I was told I would get two songs without any other restrictions. When Manson's tour manager came out, however, he laid the ground rules of one song limited to shooting from the edge of the barricade and no option to move around.

Overall, this was a very difficult shoot, not only because of the severe restrictions, but because of the lighting and Manson's singing style. Between the dramatic underlighting and Manson's tendency to trip the mic with both hands closely to his face, which effectively blocked most light, securing clear shots of the singer was an extreme challenge.

Add to this mix constant motion and this performance was right up there with the challenge of photographing the pounding metalcore of recent weeks. Manson lurched around the stage like a Romero-Zombie, crouching, doubling over, and staggering to upright screams all in the same breath.

For the first song, Manson primarily stayed between midstage and the edge of the catwalk, never really deviating from this track to interact with the other band members.

Lighting for the one and only song started off with a deep blue/purple wash from the back that eventually gave way to bursts of white light from two lights on the right side of the stage.

From there, the lighting scheme turned to a deep wash of green mixed with a little magenta and blue lighting.

On the catwalk, there was a short strip of warm incandescent lights that flared up periodically throughout the set. During the later half of the first song, this small array provided the majority of the light falling on Manson as the atmospherics died off considerably.

Given the limitations and challenging lighting, I photographed Manson exclusively during one alloted song. The rest of the band played primarily in background lit by the various washes and monochromatic accent lighting.

Overall, the quantity of light wasn't so much the challenge so much as it was the quality. Leaving the pit, I turned around as Manson launched into the second song to see the stage lit up like Christmas.

I shot with the Nikon D3 and the Nikon 24-70mm f/2.8, which seemed to provide adequate coverage given the restrictions.

I was tempted to switch to the Nikon 70-200mm f/2.8 a few times, but ultimately decided to favor the midrange zoom due to Manson's erratic movements on stage, which easily would have rendered the telephoto lens too tight.

Throughout this set I was feverishly twisting dials as the lighting changed, with rare review of the exposure during the hectic pace of the first song. I'd be interested in seeing how using an automatic metering mode with spot metering would have worked for this set, given the dramatic contrast extremes and the fast lighting.

One of the most challenging aspect of this lighting is that Manson's distance to lighting on the catwalk dramatically affected exposure. Standing at full height in his knee-high platform boots and going to a low crouch, the exposure changed by almost two stops.

After shooting in 12-bit RAW for a few shows, I decided to kick it back into 14-bit mode for this show. The main reason was this pair of articles (1, 2) on the differences between these modes. Given the massive amounts of smoke and gradations I expected with the show, I thought I might as well get as much detail as possible.

While I was really looking forward to this shoot after seeing some of the great shots from Marilyn Manson's recent European tour, I was disappointed by the quality of lighting and the severe restrictions of the shoot.

With only one song and primarily atmospheric lighting, I'm pleased with the images. Still, I'd like to have seen what would have been possible with the upbeat second song of the set, which featured much more dramatic lighting.

Big thanks to Carsten, Riny, Jason, and Rod for their advice on shooting this gig.