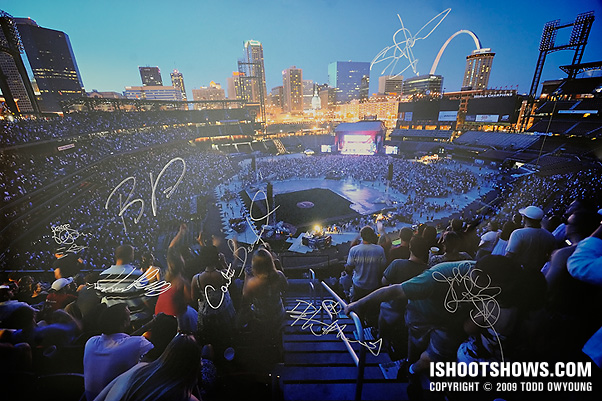 A 20″ x 30″ print signed by Dave Matthews Band, which was used as the cover art for a live recording recorded at Busch Stadium in St. Louis.

Last September, Dave Matthews Band licensed one of my images to use as the album cover for one of their live recordings. A few days ago, out of the blue, my lovely Live Nation representatives surprised me by arranging for a signing with the band before their concert this week.

When I photographed Dave Matthews Band performing at Busch Stadium last year on June 7, the event seemed liked any other assignment. True, the scale was a little larger – the event had drawn 35,000 fans and marked the first concert of the then-new Cardinals' ballpark. But apart from the fanfare, the constants remained: there was a band on stage, a camera in hand, and a job to be done.

After photographing the band's first three songs – the industry standard for most national touring acts – press were led up to the upper level of the new stadium opposite the stage, which sat in the outfield.

This vantage point was perfect for capturing the essence of the event, revealing a sea of fans filling the stadium before the glow of the stage, with the St. Louis Arch and the skyline as the backdrop.

Along with the other press photographers, I surveyed the scene, made my shots, and then headed home to process the images for delivery.

As a courtesy, I also sent a set of images to my reps at Live Nation, who produced the event.

I didn't think much more of the concert until several months later, when Live Nation contacted me about licensing the image on behalf of Dave Matthews Band.

While every music photographer hopes to have a concert image grace an album cover in their career, I never would have guessed that my first would be for a national act like Dave Matthews Band. The band featured the stadium shot as the cover art for their Live Trax recording of the St. Louis show.

Fast forward a year, and I'm photographing DMB again on their annual summer tour, this time at the Verizon Wireless Amphitheater.

A few days before, my contact with Live Nation had surprised me with the suggestion that I should bring a nice print of the stadium shot the band had used for the cover art.

With a massive 20″ x 30″ print in tow, I showed up to the venue, dropped off the image at the venue's production office, and headed out to photograph the concert.

With Dave Matthews Band, I've come to expect nothing less than excellent production in their live show, and this event was no exception. From the first bars, the band had the crowd on their feet and dancing in the aisles, all while performing under an epic stage treatment of lush lights and LED screens.

After photographing the concert, I met up with the Live Nation folks again, who returned with the print signed by the band.

A year after photographing Dave Matthews Band's Busch Stadium performance and the album cover that followed, I couldn't think of a better memento to mark the occasion.

Here's how the band used the image for their Live Trax series: 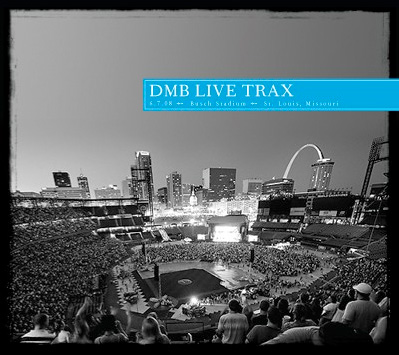 Stay tuned for the images from this year's live show – they're coming up!