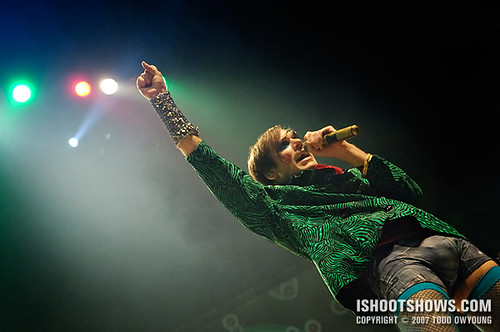 Playing to an adoring crowd, Kevin Barnes lead his band Of Montreal through a roaring twenty-song set of psychedelic indie pop at the Pageant. Freed from the precious trappings of their album recordings, the sexed-up live performance delivered a more raucous version of fan favorites while still remaining as pretty as Barnes in eyeliner and fishnets.

With their glam rock swagger, the opening Prince cover songs, “I would Die 4 You” and “Baby I'm A Star,” seemed as natural and effortless to Of Montreal as anything else in their catalogue. From there, the band ripped into the sparkling “Suffer For Fashion,” the lead track on this year's critically acclaimed Hissing Fauna, Are You the Destroyer?.

Of Montreal proceeded to step-kick their way into a setlist that drew primarily from their last three albums, heavy with favorites that spurred cheers from the audience. Highlights included “I Was Never Young,” “Oslo In The Summertime,” “Gronlandic Edit,” “So Begins Our Alabee,” and the shimmering “Heimdalsgate Like A Promethean Curse.” 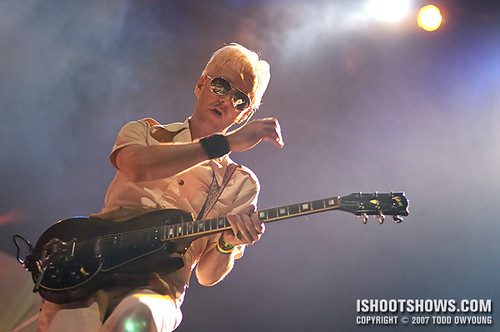 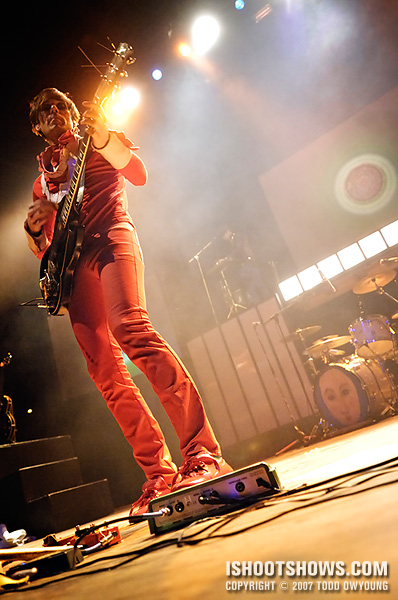 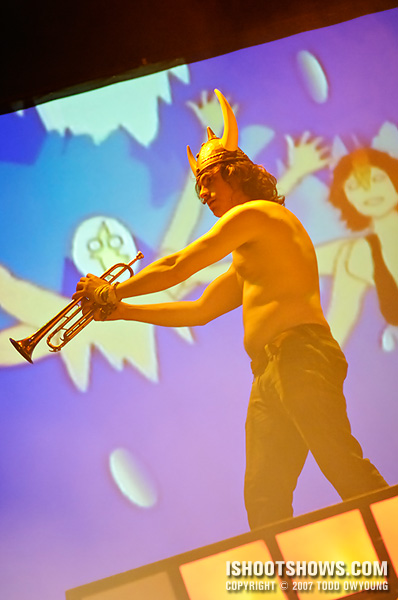 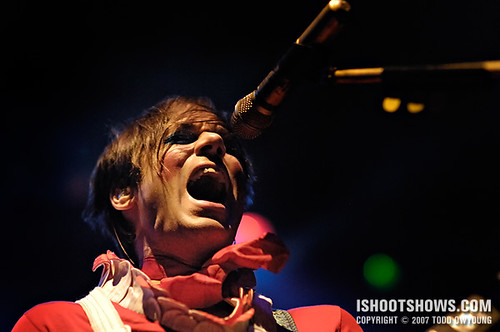 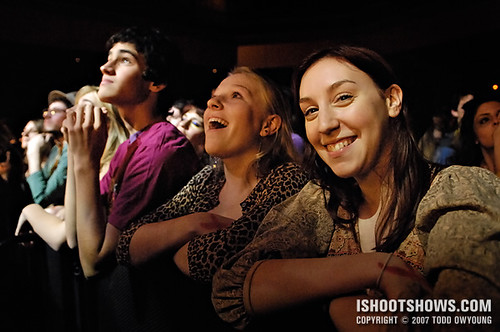 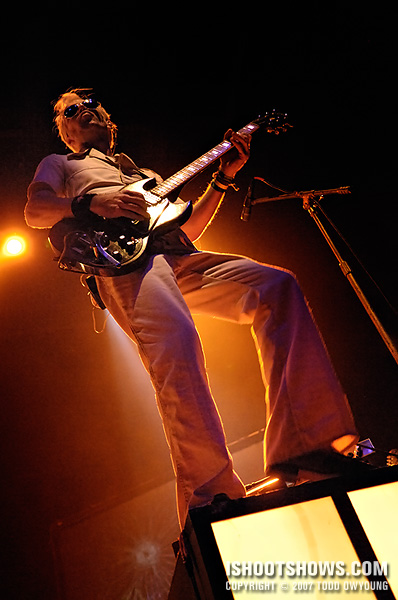 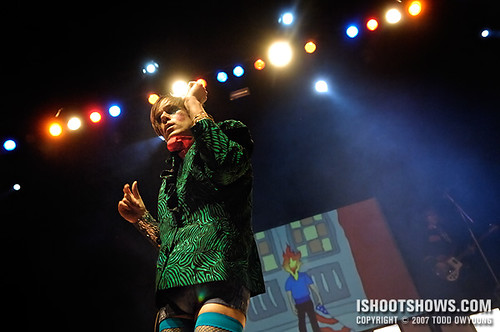 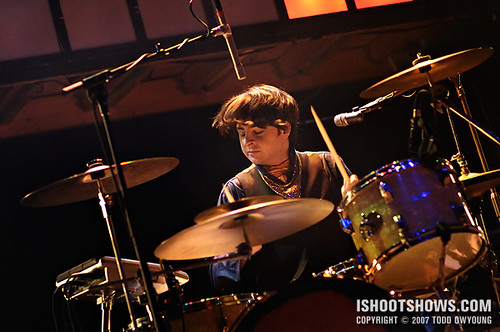 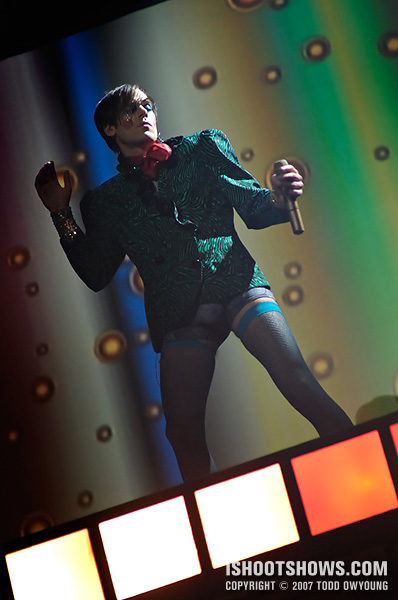 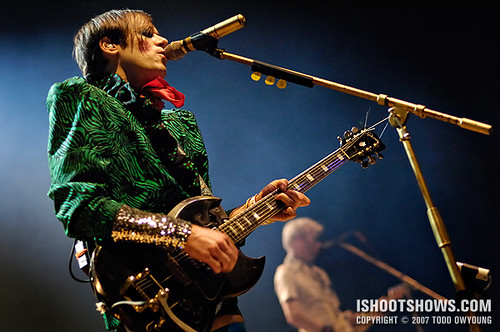 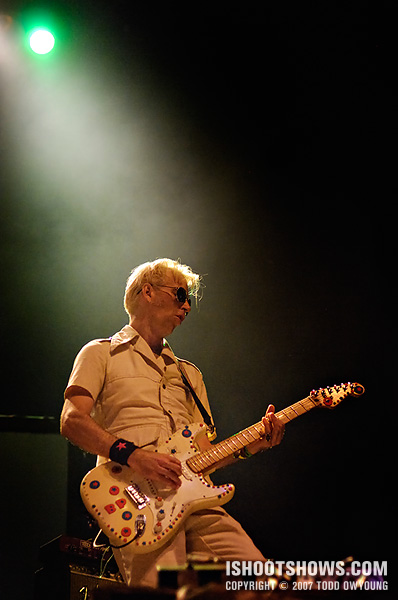 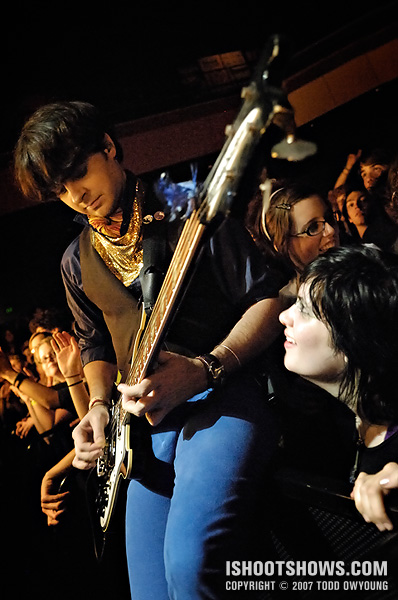 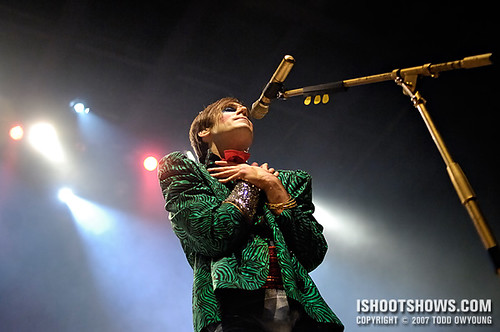 Arriving at the venue, I was greeted by a very crowded pit, filled with anxious concert-goers ready for the dance party to come. With very minimal security, the house obviously wasn't expecting trouble from the glittered kids on the floor. In fact, there were only two guards loosely covering the entrances to the photo pit on either side of the stage.

On stage, Of Montreal's setup included several platforms on which all but frontman Kevin Barnes performed. One negative effect of this setup was that the band members felt more anonymous and detached from one another, which, despite the infectious pop melodies, created a colder and less engaging group dynamic than I've seen at previous shows.

The upside, however, was that the ample space allowed Barnes lots of freedom on stage to dance, skip, and generally do his freaky thing.

Unlike other dates on this tour, the theatrics of additional characters on stage was conspicuously absent. The lone exception was the appearance of a trumpeter in a horned viking helmet, who graced the stage briefly early on in the show.

The black-clad mimes present at a few other recent shows on the tour, unfortunately, did not make an appearance, though Barnes's own flamboyant character was more than enough to engage the audience.

Overcoming the somewhat awkward stage setup, Barnes made several trips to the sides of the stage to reach out to fans, while Jamey Huggins came down off the stage to play perched on the pit's security barricade.

Aside from Barnes, guitarist Bryan Poole was the most readily accessible member of the band, who had arguable the best lighting of the group with regular backlighting effects.

For this show, I shot for the entirety of the set without interruption.

Lighting for this show was one of the more less dynamic displays I've seen for a touring national act, in part due to the set design, which included light features in a series of the raised platforms. These fixures took the form of translucent panels that lit up individually and in patterned groups, providing an inconstant but welcome source of bright white light sporadically throughout the performance.

Aside from the lighting provided by the panels on the risers, the stage received a fairly steady treatment of high frontlighting throughout the set. Contrasting this effect, a rainbow of backlighting shown at intervals during the performance, alternating between ambient accents to full, blown-out brightness, and everywhere in between. In general, the house lighting was dimmest in between songs and when the set lights were on full blast.

While the platform lighting created a great contrast for the crowd, the actual light on the band was kept to a minimum to emphasize the set.

For this shoot, I relied on the Nikon 17-55mm f/2.8, which I used mostly at 30mm and below. The wide end of the zoom was particularly useful for the more active stage antics of frontman Kevin Barnes, who made ample use of the stage locking, popping, and otherwise getting his grove on when not on vocal duties.

When the light levels dropped, I turned to a trio of f/1.4 primes, utilizing the Sigma 30mm, Nikon 50mm, and Nikon 85mm. The Sigma was a useful general lens for the event given its relatively wide field of view, while the 85mm was particularly useful for shots of the rear stage.

The reach of the Nikon 70-200mm f/2.8 would have been nice, but the performers on the back riser were generally much more dimly lit, so the speed of the 85mm was essential.

The modest Nikon 50mm f/1.4 came into play for a few snaps of Barnes and crew, balancing between the ambience of the 30mm and the islation of the 85mm.

While the lighting was unremarkable, it was also relatively constant throughout much of the set and with no major surprises. Strobes, thankfully, where no where to be seen, which made exposure an easy affair.

The ISO was locked at ISO 1600 throughout the shoot, other than a few snaps of the crowd at ISO 3200. Shutter speeds were somewhat marginal, due to high frontlighting, ranging between 1/60 and 1/160 second.

As always, you can peep the Flickr for the full set of images from this show:

In addition, to see images from the three other times I've photographed the band, you can hit these Flickr galleries as well: